A factor graph is a bipartite representation where variables (denoted by larger nodes) are interconnected by a set of factors (smaller nodes) that represent some algebraic interaction between the variables. Factors must adhere to the limits of probabilistic models – for example conditional likelihoods (between multiple variables) or priors (unary to one variable). A more heterogeneous factor graph example is shown below; see a broader discussion in the related literature : 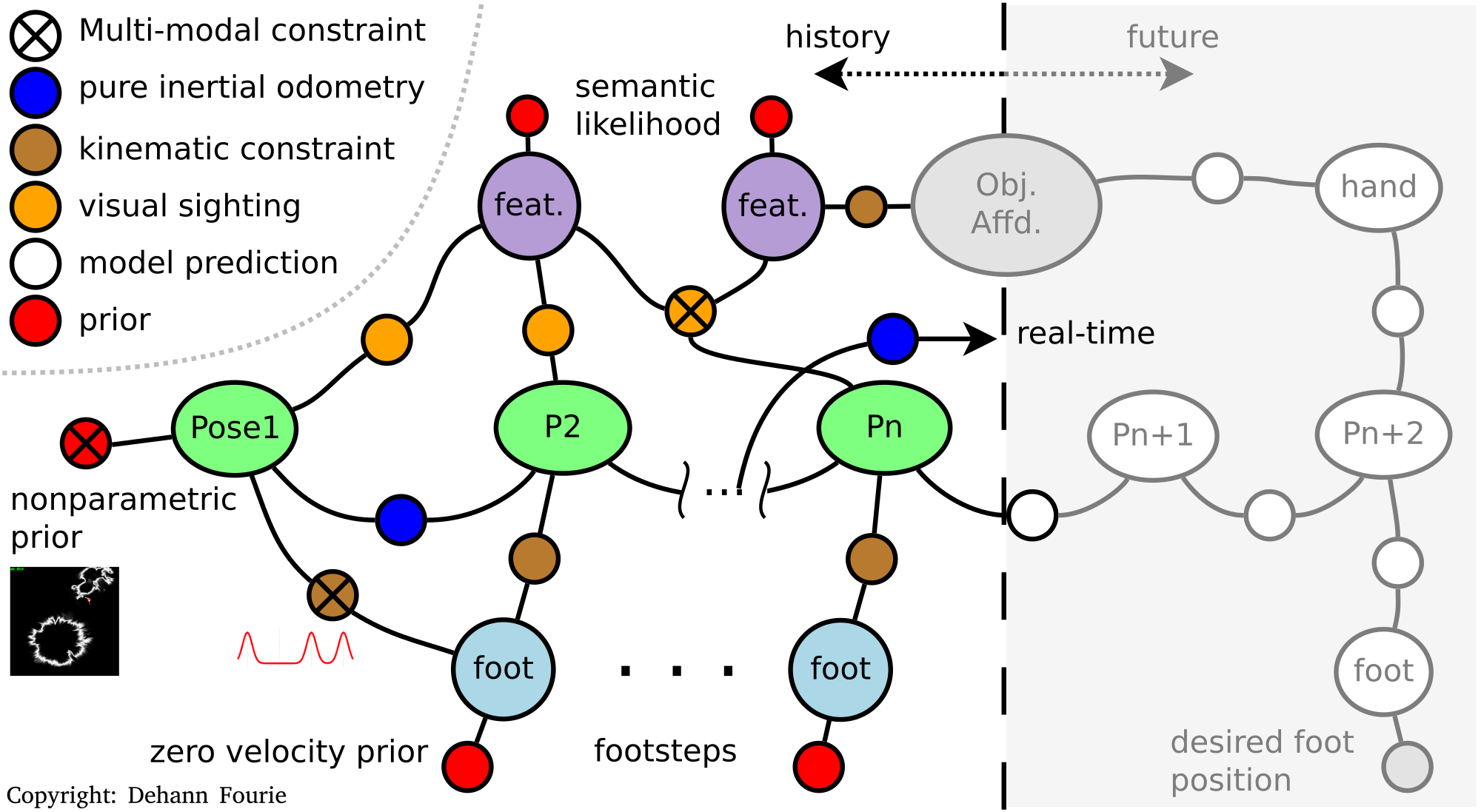 Why/Where does non-Gaussian data come from?

Gaussian error models in measurement or data cues will only be Gaussian (normally distributed) if all physics/decisions/systematic-errors/calibration/etc. has a correct algebraic model in all circumstances. Caesar.jl and MM-iSAMv2 is heavily focussed on state-estimation from a plethora of heterogenous data that may not yet have perfect algebraic models. Four major categories of non-Gaussian errors have thus far been considered:

What are Variables and Factors

Factor graphs are bipartite, i.e. variables and factors. The terminology of nodes and edges is reserved for actually storing the data on some graph-based technology.

Variables in the factor graph have not been observed, but we want to back them out given the observed values and algebra defining the structure between all observations. Mathematically speaking, factors are actually "observed variables" that are stochastically "fixed". Waving hands over the fact that factors encode both the algebraic model AND the observed measurement values. If factors are constructed from statistically independent measurements (i.e. no direct correlations between measurements other than the known algebraic model that might connect them), then we can use Probabilistic Chain rule to write inference operation down (unnormalized):

This unnormalized "Bayes rule" is a consequence of two ideas, namely the probabilistic chain rule where Theta represents all variables and Z represents all measurements or data

Getting Started with Caesar

This section discusses the various concepts in the Caesar framework.

When launching the REPL in a terminal or and IDE like VS Code (see link for documtation website):

The -O 3 is for level 3 code compilation optimization and is a useful habit for slightly faster execution, but slightly slower first run just-in-time compilation of any new function.

To get help with a function, just start with the ? character followed by the function name, e.g.:

Assuming you just loaded an empty REPL, or at the start of a script, or working inside the VSCode IDE, the first thing to do is load the necessary Julia packages. Caesar.jl is an umbrella package potentially covering over 100 Julia Packages. For this reason the particular parts of the code are broken up amongst more focussed vertical purpose library packages. Usually for Robotics either Caesar or less expansive RoME will do. Other non-Geometric sensor processing applications might build in the MM-iSAMv2, Bayes tree, and DistributedFactorGraph libraries. Any of these packages can be loaded as follows:

For completeness, so too with packages like Images.jl, RobotOS.jl, and others:

Julia allows high-performance, parallel processing from the ground up. Depending on the configuration, Caesar.jl can utilize a combination of four styles of multiprocessing: i) separate memory multi-process; ii) shared memory multi-threading; iii) asynchronous shared-memory (forced-atomic) co-routines; and iv) multi-architecture such as JuliaGPU. As of Julia 1.4, the most reliable method of loading all code into all contexts (for multi-processor speedup) is as follows.

Make sure the environment variable JULIA_NUM_THREADS is set as default or per call and recommended to use 4 as starting point.

In addition to multithreading, Caesar.jl utilizes multiprocessing to distribute computation during the inference steps. Following standard Julia, more processes can be added as follows:

It might also be convenient to warm up some of the Just-In-Time compiling:

The best way to avoid compile time (when not developing) is to use the established Julia "first time to plot" approach based on PackageCompiler.jl, and more details are provided at Ahead of Time compiling, and a few common questions might be answered via FAQ here.

The next section describes the initial steps in constructing and solving graphs will be discussed in the upcoming documentation page Building and Solving Graphs. We also recommend reviewing the various examples available in the Examples section. The variables and factors in Caesar should be sufficient for the majority of robotic applications, however Caesar allows users to extend the framework without changing the core code. This is discussed in Creating New Variables and Factors. Caesar supports both in-memory solving (fast, for moderately-sized graphs) as well as shared data persistence and inference for massive graphs, multiple sessions, and multiple agents.

This document was generated with Documenter.jl on Monday 29 March 2021. Using Julia version 1.6.0.