Major refactoring of documentation under way 2020Q1. Much of the previous text has be repositioned and being improved. See references for details and check back here for updates in the coming weeks. 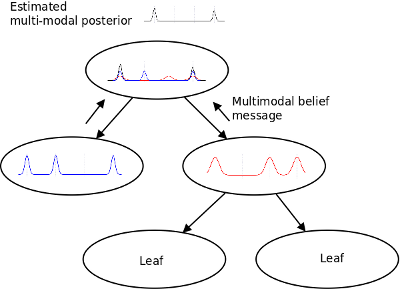 Algorithm combats the so called curse-of-dimensionality on the basis of eight principles outlined in the thesis work "Multimodal and Inertial Sensor Solutions to Navigation-type Factor Graphs".

The main computational effort is to focus compute cycles on dominant modes exhibited by the data, by dropping low likelihood modes (although not indefinitely) and not sacrificing accuracy individual major features.

The CSM is used to govern the inference process within a clique. A FunctionalStateMachine.jl implementation is used to allow for initialization / incremental-recycling / fixed-lag solving, and will soon support federated branch solving as well as unidirectional message passing for fixed-lead operations. See the following video for an auto-generated–-using csmAnimate–-concurrent clique solving example.

Convolution operations are used to implement the numerical computation of the probabilistic chain rule:

Please follow, a more detailed description is on the convolutional computations page.

Work In Progress – deferred for progress on full functional methods, but likely to have Gaussian legacy algorithm with mixture model expansion added in the near future.